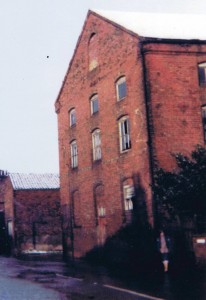 A view of the Chocolate Mill in Thorpe Lane

An aerial view of the mill showing the scale of the building compared with surrounding houses. It must have dominated the houses on  Water Row
The chimney was at least 5 storeys high and we know from local resident’s memories it was demolished one brick at a time.
The small building on the opposite side of the road with grey roof was the Adult school….presumably for further Adult Education and later was a junk shop

Called the Perseverance Mill it was built in 1852 as a corn mill ……………see photos of mill with date on the front……….

In the yard were stables for the horse and a boiler house. It was first operated by steam then gas was tried but proved to be uneconomic.

Once a year the mill was scrubbed clean from top to bottom to grind flour for the Passover bread for the Jewish people. The bread was called Matza Biscuits

Miss Storr’s house on Water Row was the Mill Office

When the mill was being constructed in 1852 a bore hole was sunk to obtain fresh water below the mill. There was also a pipe going into the river from the site which passed through a gateway at the side of a house on Water Row.

The flour mill was quite a sizeable building with at least 3 floors. 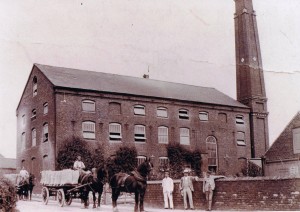 Mill was closed down about the beginning of the First World War due to the lack of being able to get a spare part for the mill from Germany!
During the WW1 German prisoners were housed in the mill They worked on local farms during the day
After the war it was a chocolate factory for a while possibly making chocolate cream whirls employing people from the Cawood, Kelfield and Wistow.
Interviews with local residents say they took waste chocolate out of the bins on their way home from school.
Another resident said she used to play in the derelict building but there were lots of rats
During the WW 2 soldiers were housed in the building.
A Cornish regiment was stationed here before going to the front to fight
Australian Officers were also stationed here
After the war it was empty for a long time.
Plans for change of use were refused
due to the bad access onto Thorpe Lane. 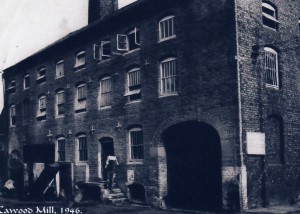 The mill was burnt down on the 13th November 1980. The cause of the blaze was unknown. There was too much damage to reveal any evidence of how the fire started. Villagers raised the alarm just before 10pm and firemen from Tadcaster, Selby and York fought the blaze before it was brought under control.

Flames spread rapidly through the 3 storey building and leapt through the burnt out roof. Mr. Alec Walton, owner of the mill, who had owned the property for 3 years, said there would have been less risk of a fire if a new use had been found for the mill, which was deteriorating into a village eyesore. This newspaper article describes the “eyesore” just before it was burnt down

More about the Mill fire..

At one time there were fears for the safety of the nearby buildings. Villagers were advised to keep windows and doors closed but firemen prevented any further spread and no-one was evacuated.
Because of the height of the building, a turntable ladder was dispatched from York and firemen connected pumps to the river Ouse to back up the local water supply. Police closed the Cawood to Selby road for several hours
A fire brigade spokesman on the spot said… the fire spread very rapidly- the interior of the building was as dry as matchwood.. A succession of owners had tried in vain to find a new use for the derelict building
The latest one, Mr. Walton said he knew four people who wanted to build on the site. He has also been refused planning permission to use the mill for storage, light engineering and agricultural machinery work.
As a result the building had continued to deteriorate and he had been warned action was needed to prevent danger to residents nearby.
He said “ I went down every month to nail up the windows. But each time it was knocked down. It has just been a playground for kids.

During demolition the chimney was taken down a brick at a time….must have been a lot of bricks I wonder if they were locally made?