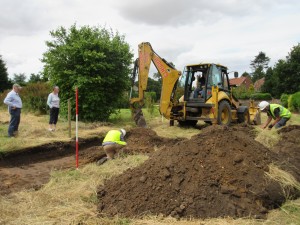 In this trench we are hoping to find evidence of a medieval house on the site.

On early maps, a building can be seen centrally on the site surrounded by the moat.

It’s doubtful that we will find foundations, more likely it will be a series of post holes. To see this type of evidence, a larger area of earth removal  is needed.

Part of the cess pit in trench 1

At the corner of the trench there was large amount of dumping of brick and tile. As this was removed, the pit lined with clay, looked like a cesspit.

After all the dumping was removed the base had a shelf of Tudor bricks which could have been used as a step to get out of the hole when needed. The depth of the hole was over a metre deep. Over the base was a thin layer of ash then clay and sand

There are slots in the side of the trench, filled with upright roof tiles which could be part of an early building.

A large area of burning is evident on the clay surface near these slots. A round post hole was found made of a mixture of shells and mortar. This was on a lower level than the turf.

This trench is so full of water it’s almost overflowing onto the grass. Any hope of finishing the digging has now gone. 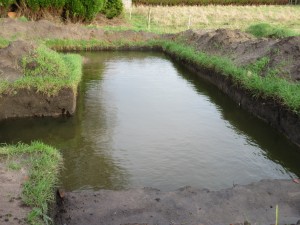