This trench is in the entrance to Keesbury on Broad Lane just inside the gates. We are trying to see if there is evidence of a house here.

The children from Cawood school began the archaeological investigation in this trench. There were very little evidence of finds…. mostly 19th century

Some initial investigation in the trench has found a very large post hole. Could this be part of the frame of a Gate house or is it just a gate post for an earlier entrance? 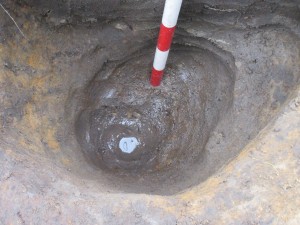 We have also noticed that there are various layers of sand in here.

These go down through a very thick yellow/black layer onto a brown layer and finally to a grey layer. This layer has band of gravel crossing the trench which looks like a water course.

Have we found another part of the medieval ditch which runs down Broad Lane?

After cleaning this trench for 2 days the water table has risen and filled the features. 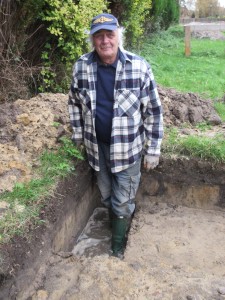 Roger testing the level of the water table

On the 1775 Enclosures map of the village, a house was noted somewhere near the entrance. The house had gone by 1850’s.

So far there is very little archeology showing. This trench has not been investigated yet. 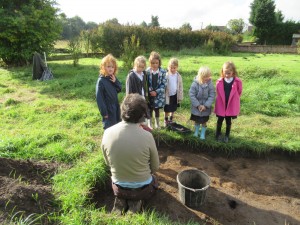 Not much chance of digging here unless you wear a snorkel