This trench was positioned to determine the reason for a raised area behind the houses in Broad Lane.

It was thought that it was possibly caused by dumping of building rubble from the construction of the houses.

However, there was very little evidence of brick rubble. It was mostly small pieces of brick & tile mixed in with the soil……….possibly from cultivation of the land in the past.

As we dug down a sand layer appeared

In the picture, at the base of the pit, you can see the sand. This was used to build up the mound further across the site for the manor house 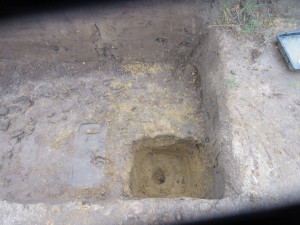